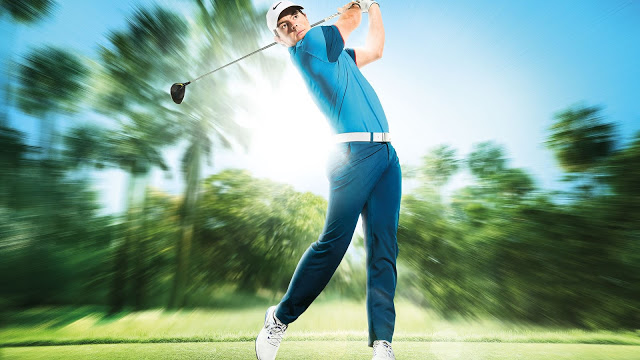 Rory McIlroy PGA Tour is the first golfing game from EA since the 16 year dominance of Tiger Woods. Built from the ground up to utilize the Frostbite 3 engine, is McIlroy the start of a new era or will the series never be the same after Wood’s departure? Read on to find out!

Rory McIlroy PGA Tour is a fresh start for the new generation of consoles and there series itself. The game opens with a prologue of McIlroy facing off against Martin Kaymer in the US Open Championship at Chambers Bay. But before the action begins, there are a few key gameplay differences to understand. With the most important being the Styles.

There are four different gameplay styles to choose from: Arcade, Classic, Tour, and Custom. The Arcade style sets the swing motion to the left analog stick. Players simply pull back and then hold forward with deviations being taken into account. The Classic style is your typical 3-click setup. To swing, players must click once to begin, once for power, and once for accuracy. The Tour style is new to the PGA series. Swing power and accuracy are purely determined by the speed and direction of the left analog stick. By default, all of the assists are turned off on Tour difficulty including course zoom, aiming arc, and putt read.

The fourth style is Custom. This allows you to alter any of the assists and styles to create your own experience. For instance you can have the swing of Tour but include the putt read assist. Or go for the Arcade style but without the added bonus of assists. The Custom difficulty really leaves the door wide open to tailor your own golfing experience.

With your chosen style selected it’s time to take to the courses. There are four different game modes in Rory McIlroy PGA Tour: Pro Tour, Single Play, Multiplayer, and Night Club Challenge.
The Pro Tour is for those wanting to build a legacy with their own created character. The character customization allows you to change the head style, skin tone, body type, hair color, and more. You can also select between three different backstories: Prodigy, Collegiate, and Instructor. These backstories don’t have any bearing on the gameplay but instead change a few lines of dialog for the commentators Rich Lerner and Frank Lebeno. 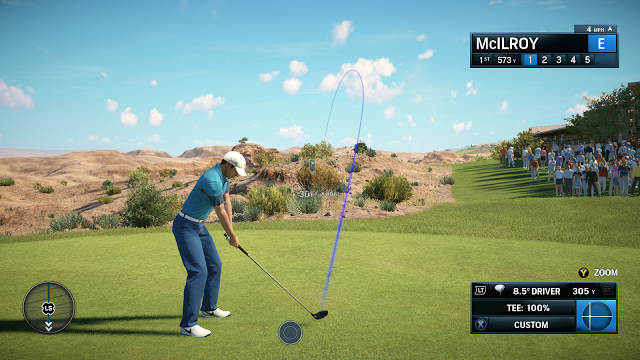 Character progression in the Pro Tour is gained through simply competing in tournaments. Experience points are earned when performing certain tasks such as getting on the fairway, getting on the green, hitting an birdie, etc. The one thing that seemed odd was that you could not choose which attributes were increased after each tournament. Instead, certain attributes would automatically be added in-between rounds for reasons unknown to me. As you progress you will unlock more clothing options and clubs to choose from as well as Attribute Bonuses. The Attribute Bonuses are different preset “loadouts”. For example Power gives you a higher power bonus while lowering other attributes. There are 13 Attribute Bonuses in total. Another standout feature of Pro Tour are the Quick Rounds. This feature simulates the first few holes of each round so you don’t have to complete all 18 holes each day. I really enjoyed this feature as 3-4 days of 18 holes would get very old very fast.

In Single Play you have the option to choose from all 13 courses and 18 golfers (13 pro and 5 fantasy). Grab a few friends and play an 18 hole match with up to four players. The standout new course is Parcel Storm from Battlefield 4. This course is filled with crashed ships, palm beaches, and islands perfect for teeing off. There is even a Battlefield solider to choose! Thanks to the power of the Frostbite 3 engine and current generation consoles, loading between holes has been completely removed. Another new feature for the new generation is the seamless transition from gameplay to the main menu. At any time during gameplay, you can pause the game which brings up the full main menu. From here you can setup and start a completely new game mode such as the Challenges without loading back to the menu first. This is one of the coolest features I’ve seen in any current generation game period.

Speaking of the Night Club Challenge Mode, it offers three different courses (one being Parcel Storm) with over 170 challenges. In this mode you are tasked with earning three stars from a variety of unique scenarios thanks to the variety of Power-ups. There are nine Power-ups in total and you can choose three to equip for any challenge. These Power-ups include the Remote Control which lets you take full control of your ball in flight or steering it on the ground, the Sticky Ball which lets you stick your ball to the ground, the Nudge which lets you move the ball ever so slightly for those near miss opportunities, and much more. Obtaining three stars on all of these challenges will be daunting for most, and will require complete mastery of golfing skills as well as the various Power-ups.

The final modes are the two different multiplayer options: Head-to-Head and Tournaments. H2H supports up to four players with both ranked and un-ranked options. One of the best features I’ve seen in a golf game is how the online matches allow for multiple players to play the same hole simultaneously. Instead of taking one swing and then waiting for the next person to go, everyone plays at the same time and you can even see another players ball roll in front of your own. Players still have to wait to proceed to the next hole, but this speeds up the process of online matches tremendously.

There are two different styles of Tournaments: Daily and Weekly. The Tournaments allow for all three play styles and the leaderboards are separated for each. So don’t worry, if you’re playing on Tour you will only be compared to players using the same setting. The settings for each Tournament vary from week to week and day to day. One might have aiming arc turned off while another could have very high winds. These Tournaments combined with the Challenges offer a lot of replayability for fans.

Rory McIlory PGA Tour is a very solid start for this new generation. The variety of options for different gameplay and modes really allow for fans of any type to enjoy the game. I personally have not played a PGA game since PS2 and had a blast with this one. The only standout issue I noticed was that the putting reads would sometimes take way too long. When this happened it would leave me sitting there waiting for the correct read. The putting itself is fairly difficult so when this happened it made it much worse. This did not detract from my overall experience too much though, and I still thoroughly enjoyed the game.

What I played: 38 hours reaching level 53 in the Pro Tour, completing 23 challenges, playing all modes, and unlocking 17/28 achievements.