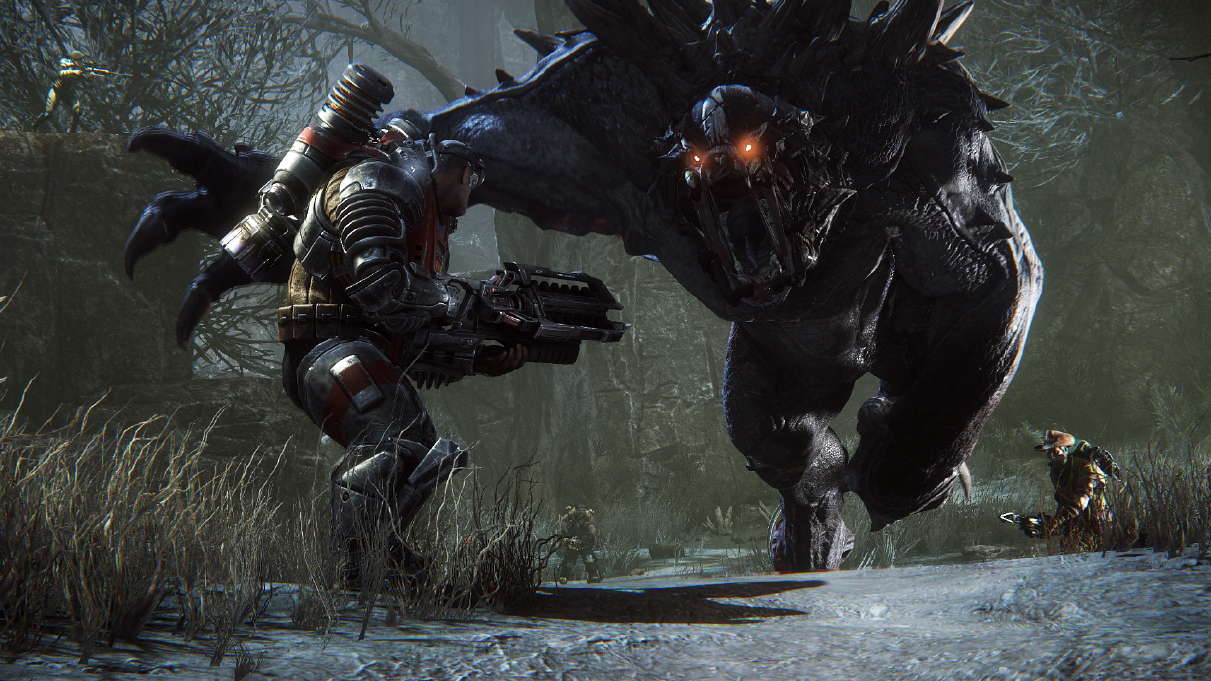 Welcome to Evolve, a third-person, asymmetric, multiplayer shooter from the creators of the original Left 4 Dead. The core of the gameplay revolves around four Hunters fighting against one player-controller Monster. The Hunters have to use teamwork and communication to take down the Monster, as they individually don’t stand a chance. There are four classes for the Hunters, each with three unique character that have their own set of equipment and abilities. There are also three different Monsters each with their own play style and abilities.

Evolve has four game modes: Hunt, Nest, Rescue and Defend. Plus Evacuation which is a combination of the four. Evacuation mode is the multiplayer replacement of a traditional story mode. Evacuation pits four hunters against a player-controller (or AI) Monster in a five game series of matches that mix in each game mode. After each match both sides get a bonus for winning or losing. The winning side is rewarded with a map bonus that alters gameplay. Map bonuses can include extra wildlife or a companion minion for the Monster, and friendly survivors or clear skies for the Hunters. While the losing side gets an overall boost to their abilities to help balance the next match. These additions add an extra dynamic that keeps Evacuation mode different every time you play. The overall winning team at the end of the five matches also receives a large XP reward that can be the equivalent of six individual matches depending on how well you did. Evolve also offers Solo and Custom options which can be played with friends or against A.I. opponents.

Evolve’s greatest strength is also it’s greatest weakness. Unlike most multiplayer shooters, Evolve requires a tremendous amount of teamwork from all four Hunters to successfully win against the Monster. Each class has a specific role to play, and each role is a vital key to victory. The Assault is the primary damage dealer, the Support buffs teammates with extra bonuses, the Medic heals and revives teammates, and the Trapper tracks down and traps the Monster in a dome. This is a far cry from games like Call of Duty, Battlefield, or even Rainbow Six where one skilled player can carry the rest of the team. The major issue here is that Evolve only works when you have four people who are communicating and know what they’re doing. One slacker can have a serious impact on the whole team. 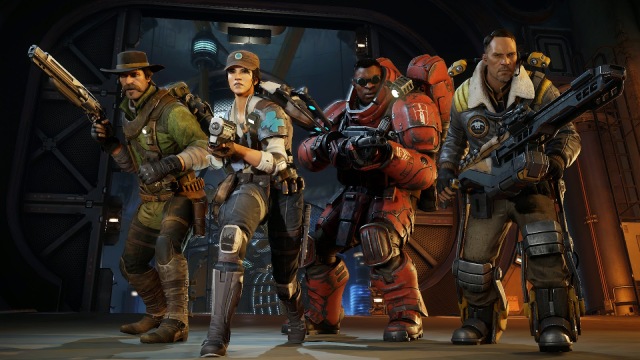 The starting characters for each class (Maggie, Markov, Val, and Hank) are the most well rounded. They serve as the starting point for players of all skill levels to immediately jump in and starting playing. But the successive characters, the characters you have to unlock through progression, aren’t always better than the originals. In most cases they are more difficult to play with and in some cases are flat out worse. I’ll use the Assault and Trapper classes as an example.The first Assault character, Markov, is equipped with a Lightning Gun that automatically hits any close range target as long as you are aiming at it. It basically creates a constant stream of lighting directed at the target as long as you can stay close and have a decent aim. His second weapon is a standard Assault Rifle which can be used at close, medium, and long range. He also has a personal shield to deflect all incoming damage and Arc Mines.

The third Assault character, Parnell, who requires players to complete three 1-Star challenges with Markov and Hyde to unlock, isn’t all that much better. He is equipped with a Rocket Launcher and Shotgun for his primary and secondary weapons. Both are very high damage weapons, but the Rocket Launcher obviously requires skill on the part of the player to hit a target, and the Shotgun also requires the player to get extremely close to the opponent. He also has a personal shield and an ability which makes him move faster. This combination can be better than Markov’s but it is highly dependent of the skill level of the player, especially when playing against the fast moving Wraith. While Markov’s setup is well suited for any situation.

Another example of this is with the Trapper class. Maggie, the first Trapper, has a pet Trapjaw named Daisy. Daisy can not only revive teammates but she also acts as a fifth player on the team who has to be killed in order for the Monster to win. Not only that, she also tracks down the Monster without the need of visual or audio cues. This alone makes Maggie one of the best Trappers to choose from. But she also has a Harpoon Launcher which snares the Monster after being placed on the ground, a Machine Pistol which does a low amount of damage, and the Mobile Arena which traps the Monster in a dome to allow the Hunters to deal as much damage as they can before it escapes. The primary requirement of the Trapper isn’t to deal damage but to track and trap the Monster, and Maggie exceeds in doing both.

In a multiplayer focused game, progression should be the main focus to keep people playing. That progression can be in the form of better weapons, more attachments, a leveled up character, new powers, or anything that gives the player a reason to keep playing. Evolve gives the player the best, and most well-rounded characters at the very beginning and rewards them with increasingly difficult to use characters thereafter. The Monsters aren’t an exception either!

The base game comes with only three Monsters: Goliath, Kraken, and Wraith. The starting Monster is the most well rounded of the three, just as the Hunters. His abilities are well suited for close, medium, and long range, he can jump to cover long distances, and has 10 bars of armor. The Kraken and Wraith, while both strong in their own right, aren’t as well suited for any situation as the Goliath is. The Kraken can fly and has good ranged attacks, but isn’t very good in close-range situations. The Wraith is very fast and can easily out maneuver the Hunters, but the Wraith significantly lacks in health and armor.

Again, this is a case of the base character being the most well-rounded of the three and suitable for players of any skill level. This isn’t to say the other two Monster are bad, but they both require the player to change their playstyle to fit the abilities of the Monster.

Evolve can be a very fun multiplayer game… as long as you have friends to play it with or don’t mind finding new ones. The game almost deserves two separate reviews, one from a solo player and one from a group player. I personally only played with one other friend during my time with the game and that is what this review is based on. Combining this fact with the unrewarding progression system, convoluted pre-order bonuses, the threat of major glitches, and server issues will make Evolve a hard sell for any customer. Some people will be able to overlook these grievances but I simply cannot applaud a multiplayer focused shooter for not implementing essential components required by any multiplayer video game.

Summary:
– Difficulty when not playing with a party of four
– Successive unlock characters not being better than the previous
– Ridiculous amounts of retail exclusive pre-order bonuses
– Small number of Monsters (at launch)
– Minor graphical glitches
– Server connectivity issues
+ Fun if you have teammates that communicate and work together
+ Evacuation mode
+ Solo and Custom match options

What I played: 18 hours playing every game mode, and trying all characters except two hunters. Unlocking 30/49 achievements on the Xbox One.