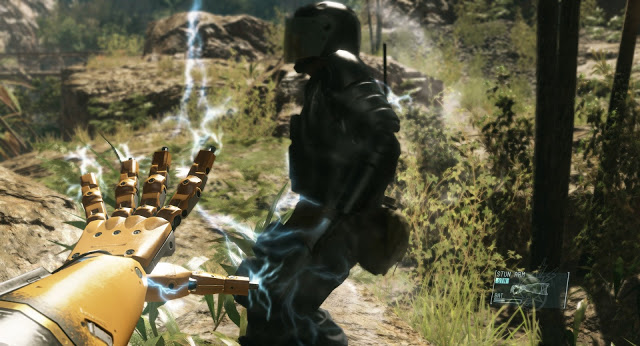 After 100+ hours of gameplay between Bond and myself, we’ve come across a lot of ridiculous features in Metal Gear Solid V: The Phantom Pain. With plenty more to still experience, here are 30 crazy things we did/saw in MGSV: The Phantom Pain!

1. Slid down a hill in a cardboard box

2. Got transported via box delivery from one side of the map to the other

3. Stole a tank with the Fulton system

4. Found a cassette tape of a guy shitting…

5. Called in a support chopper that was blasting “She Blinded Me With Science”

6. Made an enemy filled truck spin out by driving into horse poop

7. Shot at enemies with a water pistol

8. Stealthy extracted a prisoner while listening to “Kids of America”

10. Took down a legendary brown bear

11. Practiced my hide and seek shooting skills at the Mother Base

12. Punched my own soldier and was thanked for it

13. Watched D-Dog kill a man with a knife between his teeth

15. Did exactly what Miller advised not to 23 times

16. Tranquilized an enemy face down in a puddle of water… he died

17. Knocked out an enemy by calling in a supplies drop

18. Got shot by Quiet after hitting her with a Jeep

19. Had a bucket of water thrown on me after returning to Mother Base smelly

21. Sniped the tire of a vehicle, knocking out the driver and passenger

22. Fultoned a Jeep with a prisoner tied up in the back…. with no seat belt

23. Tranquilized and fultoned an Eagle

25. Smoked an electronic cigar in the middle of the battlefield to pass the time

26. Knocked myself out with a supply drop

28. Fought against a child solider commander… and beat his ass

29. Colored D-Dog white and gave him a prosthetic eye. His new name is Ghost